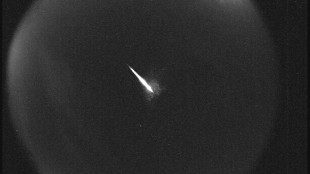 Across the galaxy, craters serve as a reminder of the frequency with which celestial objects crash into one another. Here on Earth, people recognize such collisions as largely destructive; they are thought to have triggered large-scale extinction events in our planet’s history. But now researchers have confirmed that such impacts have the potential to also give rise to life, generating the amino acids needed to build proteins.

A team reporting in Nature Geoscience this week (September 15) replicated the impact shock of colliding astronomical bodies using a specialized gun to shoot high velocity, steel projectiles into icy mixtures with chemical compositions similar to comets. Hurling forward at seven kilometers per second, the projectiles triggered shock waves so intense that, upon impact, they caused amino acid to form from the mixtures’ basic chemical compounds. The researchers synthesized eight amino acids this way, including glycine and alanine, which are found in...

“Our work shows that the basic building blocks of life can be assembled anywhere in the Solar System and perhaps beyond. However, the catch is that these building blocks need the right conditions in order for life to flourish,” Zita Martins, the study’s lead author and an astrobiologist at Imperial College London, said in a statement. “Excitingly, our study widens the scope for where these important ingredients may be formed in the solar system and adds another piece to the puzzle of how life on our planet took root.”

“What we have done is demonstrate a process that takes molecules that were present at the time of the birth of the solar system and made them into molecules that are required for life,” study coauthor Mark Price, from the University of Kent told The Guardian. “It’s like taking simple Lego bricks and sticking two together. You are a long way from building a house, but it is a start.”