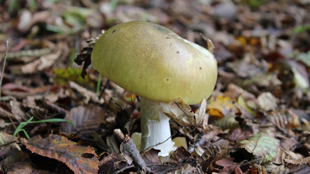 The death cap mushroom looks just like the common white button mushroom, but don’t mistake one for the other in your salad. The former is true to its name: death cap mushrooms (Amanita phalloides) contain a-amanitin, one of the most deadly poisons found in nature. But now, scientists from three German research centers are using that toxin for good—combating pancreatic cancer.

Published online last week (March 27) in the Journal of the National Cancer Institute, researchers attached a-amanitin to an antibody that binds to EpCAM, a cell surface protein abundant in human cancers. In a dish, the poison-loaded antibody arrested the growth of pancreatic, colorectal, breast, and bile duct cancer cell lines. In mice transplanted with human pancreatic tumors, the treatment resulted in tumor regression in 9 of 10 mice, FierceBiotech reported.

"Even at high doses we have not...

Alpha-amanitin is an ideal toxin for the treatment, the authors noted, because it is small enough not to be recognized as foreign by immune cells, but robust enough to hitch a ride on the antibody. Still, the dosage in humans would need to be carefully calculated, as the poison is especially toxic to liver cells, and numerous healthy cells do have the EpCAM protein on their surface, just in lower quantities than cancer cells.