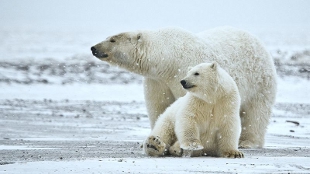 The polar bear’s origins have been a topic of much discussion in recent years, as the Arctic bears have begun to migrate south and interbreed more frequently with their brown bear cousins. A new genetic analysis, performed by German Biodiversity and Climate Research Centre researcher Axel Janke and colleagues, suggested that the white bear is much older than scientists previously believed—some 600,000 years old, to be exact. That’s much older than previous estimates of around 150,000 years. The findings, published yesterday (April 19) in Science, suggest that polar bears have had more time to adapt to the Arctic environment.

"We know much better now when polar and brown bears diverged," Janke told GenomeWeb Daily News. "Now we see that [the polar bear] is a really distinct species with its own long evolutionary history."

Janke and his team drew their conclusions from a comparison...