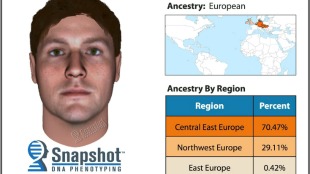 PARABON NANOLABS INCDNA left behind at a crime scene may help give some idea of what suspects look like, and a Virginia-based company is commercializing that process. Parabon Nanolabs has developed a product that predicts the appearance of a person’s face based on his or her genetic sequence.

“A sketch artist uses information pulled from an eye witness to create a sketch,” Steven Armentrout, the founder and CEO of Parabon, told NBC News. “And our algorithms are doing the same thing with a genetic witness, with that DNA that was left at the crime scene to create a sketch.”

The news station put the “Snapshot” service to the test, sending Parabon a water bottle from which reporter Kate Snow drank. The resulting sketch does not resemble Snow’s facial details, but it got her hair color and complexion right.

Criminal investigators are currently using the technology for “lead generation, narrowing suspect lists, and identifying unknown remains,” according to a press release from Parabon. In one such case, Parabon provided a sketch to law enforcement of a white man with dark hair and light eyes connected to the 1988 murder of a child, The Journal Gazette reported. “In this tragic case and the many like it, we aim to bring renewed hope to the families and friends of crime victims that their loved ones will get the justice they deserve,” Armentrout said in a statement.