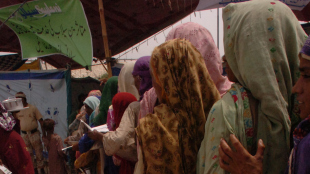 WIKIMEDIA, CPL. JENIE FISHERAs Ebola rages on in West Africa, Pakistan is dealing with a terrible outbreak of polio. More than 200 people have contracted the disease this year, the worst infection rate in more than a decade, The Washington Post reported this week (October 7).

“We want to limit the virus outside of our boundaries and want to work to control it in our boundaries, but it’s certainly a very challenging situation ahead,” Ayesha Raza Farooq, the polio eradication coordinator for Pakistan’s government, told the Post.

Although vaccination campaigns in other countries have successfully kept polio at bay, efforts in Pakistan have not penetrated every community. Consequentially, the displacement of unvaccinated children throughout the country has opened up opportunities for the virus to spread.

Part of the problem is a mistrust—and even deliberate sabotage—of vaccination campaigns. Health-care workers have been killed by Taliban and Islamist...

Sona Bari, the spokeswoman for polio eradication at the World Health Organization (WHO), told DW this week (October 6) that Pakistan is the only country with more than 10 cases of polio this year. “It’s therefore a concern not only for the future of polio eradication in Pakistan, but also for the world as the virus from the South Asian nation has caused outbreaks in places like the Middle East,” she said.