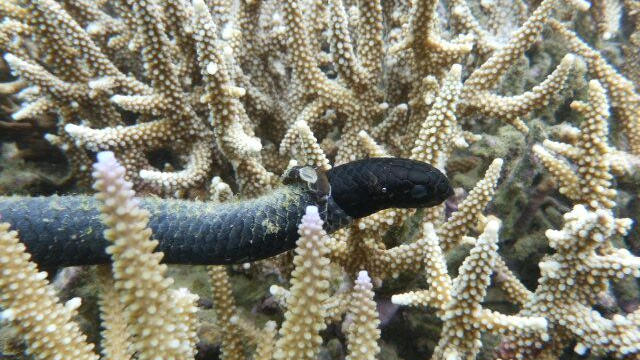 The melanistic form of the turtle-headed sea snake (Emydocephalus annulatus)IMAGE: CLAIRE GOIRAN / CURRENT BIOLOGYIn another illustration of the “industrial melanism,” populations of a sea snake species in the South Pacific are becoming increasingly dark as a result of pollution, researchers claim in a new study. The poster child of the phenomenon has been the peppered moth, whose populations vacillated between dark and light color morphs because of 19th century England’s soot-covered landscapes.

The study, published in Current Biology yesterday (August 10), provides evidence that some populations of the turtle-headed sea snake (Emydocephalus annulatus) are becoming dominated by more-uniformly dark-pigmented individuals, whereas other populations contain more-familiar color morphs that have alternating dark and light patches or stripes. The key to this apparent melanistic adaptation, the authors of the study suggest, is pollution, such as nickel, from mining runoff close to the shore of...

By measuring levels of trace elements in the evenly colored populations compared to populations with lower toxic exposures, the researchers found that more algae accumulated on darker patches of skin, and this skin was subsequently sloughed more frequently. This would give an adaptive advantage to darker snakes compared to their banded brethren, even within one population.

“That algal cover reduces the snake’s swimming speed by about 20 percent, and makes it slough its skin more often (to get rid of the algae),” study coauthor Rick Shine, a university of Sydney researcher, tells Gizmodo. “Until the idea about trace elements came along, I thought that black color was a disadvantage—but now it looks like the advantage of excreting trace-element pollutants may be great enough to overcome the algal-fouling problem.”

But are the snake populations really evolving in response to the pollution that besets their watery habitats? Some scientists are not yet fully convinced. “I have no problems in accepting that the dark areas in the skin have a higher concentration of pollution,” Arne Rasmussen, a herpetologist at the Schools of Architecture, Design and Conservation at the Royal Danish Academy of Fine Arts in Copenhagen, tells Nature. Other environmental factors, such as temperature, might explain the change, he adds.