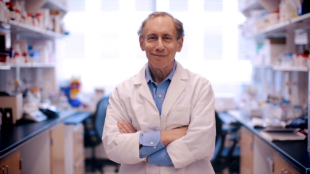 WIKIMEDIA, CHEMICAL HERITAGE FOUNDATIONRobert Langer of MIT has earned this year’s Queen Elizabeth Prize for Engineering, to the tune of £1 million (roughly $1.5 million).

According to a press release issued yesterday (February 3), “Langer was the first person to engineer polymers to control the delivery of large molecular weight drugs for the treatment of diseases such as cancer and mental illness. His unconventional thinking toppled the established view that controlled-release drug delivery would not work for large molecules like proteins, which are very sensitive to their surroundings.”

Langer has been involved in the development of cardiovascular stents, drugs to starve tumors of blood, cancer medication delivery systems, and artificial skin, among many other achievements.

“When I started doing a lot of this work in the 1970s, it probably was considered science fiction, in fact a lot of the people who reviewed our grants said we shouldn’t get the...

In a profile of the biomedical behemoth in this month’s issue of The Scientist, Langer explains that he once had to teach himself biology. “I was struggling tremendously to learn, reading all these papers in the Journal of Biological Chemistry, biology and medical journals, and probably understanding 10 percent. Then I’d go to the lab and do stuff, and that was hard, too.” The work clearly paid off; Langer is the most cited engineer in history and has more than 1,000 patents.