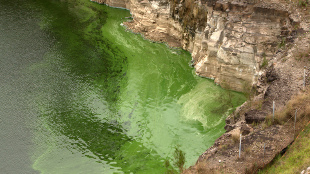 FLICKR, NEIL SAUNDERSOne of the most widely studied biological processes, photosynthesis is fairly well understood. Now, two recent studies suggest that a certain variation of photosynthesis has evolved several times independently, and that the energy-producing process may have evolved earlier than scientists once believed.

In a paper published in eLife last week (September 28), researchers from the University of Cambridge and Imperial College London used computational approaches to predict how plants that perform C4 photosynthesis—which fix carbon more efficiently than plants that use the C3 version of the process—diverged from their C3 ancestors. The researchers found that C4 photosynthesis evolved through multiple distinct trajectories, including in the diverging monocot and eudicot clades. “C4 photosynthesis provides an excellent example of how independent lineages with a wide range of ancestral phenotypes can converge upon similar complex traits,” Cambridge’s Julian Hibberd and his colleagues wrote in their paper.

The discovery has implications for the emergence of ancient photosynthetic organisms. “Because we capture oxygen in the atmosphere 3 billion years ago, the likelihood is that oxygen-producing organisms evolved before that—very early in Earth’s history,” lead author Sean Crowe, who is now at the University of British Columbia, told CBC News.

The University of Washington’s Roger Buick told Science News that the study “adds greater complexity to our picture of how and when the Earth got its oxygen. It suggests that oxygenic photosynthesis, the ultimate source of most oxygen, evolved long before the Great Oxidation Event”—when biologically induced free oxygen appeared in Earth’s atmosphere, around 2.4 billion years ago.