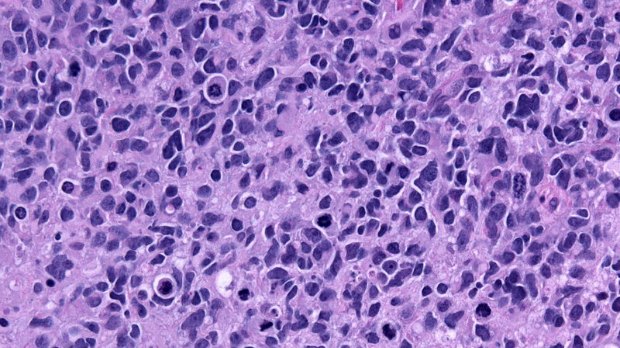 WIKIMEDIA, JENSFLORIANA widely used human cancer cell line, U87MG, was first established at Uppsala University in Sweden in 1966. But a new validation study from Bengt Westermark, who was part of the team that first created U87MG and several other glioblastoma multiforme cell lines, and colleagues finds the U87MG cells available from the cell repository ATCC are not the same as the original U87MG cells from Uppsala.

The Scientist spoke with Westermark about his team’s latest analysis of U87MG, which was published in Science Translational Medicine today (August 31).

The Scientist: What led you to question the purity of the cell line?

Westermark: Out of the cell lines I studied in my thesis, U87 was the worst. It was really very difficult to handle. It grew very slowly—large, flat cells that had a long doubling time. They were always lagging behind in my studies. [Years later] I noticed...

TS: You compared genotypes of your U87MG to those of a commercially available cell line from ATCC. How similar were these two, if at all?

TS: Were you able to figure out at what point the contamination occurred?

Westermark: No, we don’t know that. . . .We went through all the cell lines that were established before and after they were sent to the United States. The mix-up is not at Uppsala, it’s somewhere else. The ATCC cell line is a very nice cell line. I understand why people have used it.

TS: What do you know about the cell line ATCC is distributing under the name U87MG?

Westermark: What we did was make an RNA expression profile. It’s most similar to cells derived from central nervous system. The suspicion is it is really a glioblastoma cell line. If you look into the literature you can also find people have found markers that are completely consistent with a GBM [glioblastoma multiforme] phenotype and also mutations consistent with a GBM phenotype.

TS: What should be done with regard to the hundreds of publications that include “U87MG?” Should researchers go back and correct them or move forward?

Westermark: I think we should move forward. And whenever we pick up one of these papers we should know this limitation, which may be completely [irrelevant] for many publications. Move forward, don’t despair. When it comes to human GBMs, use these new types of cell lines [that are grown in serum-free neural stem cell medium, which retains tumor phenotypes]. This is the path we are taking in our laboratory. . . . Ninety-five percent of what we are doing is based on these new types of cell lines. We have in our lab over 100 such cell lines that are well-annotated, we know where they come from, we have patient data and blood samples. We really know what we’re working on.