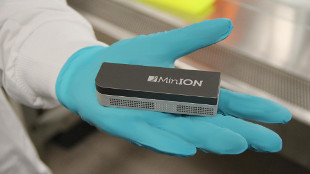 A hand-held DNA sequencer can be used to distinguish between particular strains of bacteria and viruses in as little as six hours, according to a study published this week (March 26) in GigaScience.

Oxford Nanopore Technologies’s MinION was the first nanopore sequencing device made available for independent assessment. The USB-powered sequencer contains thousands of wells, each containing nanopores—narrow protein channels that are only wide enough for a single strand of DNA. When DNA enters the channels, each base gives off a unique electronic signature that can be detected by the system, providing a readout of the DNA sequence.

To test the applicability of the device for disease detection in remote areas, researchers from the Edgewood Chemical Biological Center in Maryland, the Defense Threat Reduction Agency in Virginia, and the Austin-based consulting firm Signature Science used the MinION to sequence known samples of amplified DNA from...

“Our findings are important because we have for the first time communicated to the community that this technology can be incredibly useful in its current state,” study coauthor Andrew Kilianski of Edgewood Chemical Biological Center said in a statement.

Presently, however, the need to amplify the DNA to create a detectable sample is a stumbling block, and the method may not work on more complex samples that include host DNA, the authors wrote in their paper.