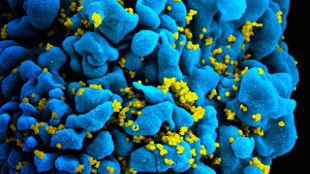 A T cell (blue) covered in HIV (yellow)WIKIMEDIA, NIHThis week was filled with good news about treating HIV. On Thursday (March 6), researchers reported in the New England Journal of Medicine that a gene-editing method that modifies patients’ own immune cells to make some of them lack CCR5, a surface protein critical to HIV’s entry into cells, was safe to use in humans and may even reduce viral load in some HIV patients.

Extracting CD4 T cells from 12 patients, researchers from the University of Pennsylvania, the Albert Einstein College of Medicine, and Sangamo BioSciences used a zinc-finger nuclease to disable the CCR5 gene, and reinfused the immune cells—of which 11 percent to 28 percent were modified at the CCR5 gene—into the patients. HIV was at undetectable levels in one of the treated patients, and in all 6 patients who stopped their regimen of antiretroviral drugs, modified...

In other news, a nine-month-old baby in Southern California who was born with the virus appears to be HIV-free after receiving antiretroviral treatment since she was four hours old. Pediatrician Audra Deveikis gave the infant a cocktail of three drugs—AZT, 3TC, and nevirapine—at high doses typically used for treating the virus. “Of course I had worries,” Deveikis said in an interview at a Boston conference where she broke the news. “But the mother’s disease was not under control, and I had to weigh the risk of transmission against the toxicity of the meds.”

The “Long Beach baby,” as she is being called, is the second case of an HIV-positive baby becoming HIV negative after early administration of antiretrovirals. Last March, researchers reported that a baby in Mississippi was given powerful HIV medications within 30 hours of birth. That child is now three years old and is HIV free.