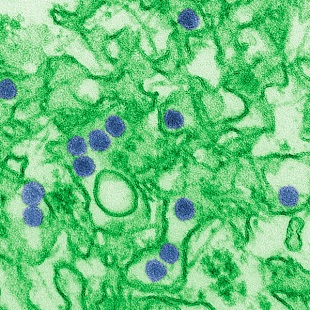 Zika virus particles (blue) WIKIMEDIA, CDC, CYNTHIA GOLDSMITHThe Zika virus may pass from a pregnant woman to her developing fetus via placental immune cells known as Hofbauer cells, according to a study published last week (May 27) in Cell Host & Microbe. The findings highlight a possible transmission route for the virus, which has been linked to microcephaly and other birth defects in more than a quarter of babies born to infected mothers.

“Our study indicates that this cell type may be a target for Zika virus in the placenta,” study coauthor Rana Chakraborty of Emory University School of Medicine said in a statement. “Replication in these cells may allow the virus to cross the placental barrier and enter the fetal circulation.”

Until now, the path of the virus from mother to fetus has remained elusive. In fact, some cells in the outermost cell layer of the...

In the present study, the team used human placentae from five donors to identify Hofbauer cells as particularly vulnerable to Zika infection. Cells called cytotrophoblasts present in the middle layer of the placental barrier between mother and fetus were also vulnerable, though to a lesser extent than Hofbauer cells. Either or both could facilitate fetal infection.

The authors also noted that the replication levels of the virus in placental cells varied by donor. “A concept that is emerging is how host genetics or other non-viral factors, including nutrition and microbiota, influence your immune response,” study coauthor Mehul Suthar of Emory said in the statement. “What our study suggests is not everyone is predisposed to having the virus replicate in the placenta, but the full meaning of this needs to be explored further.”