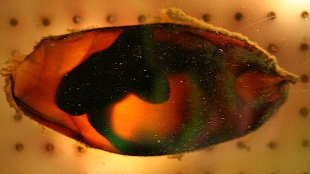 Egg case of a white-spotted bamboo sharkWIKIMEDIA, STEFANIE SESKINBamboo sharks know even before they are born that the key to survival is to stay very, very still, according to a study published this week (January 9) in PLOS ONE. In response to an approaching predator, shark embryos still wrapped up in their egg cases freeze—stopping all movement and temporality ceasing to breath to stop the movement of their gills. What’s more, if the predator stuck around too long, and the sharks embryos needed to start breathing again, they did so at a reduced rate.

“This is the first study that shows a shark embryo’s ability to detect and ‘hide’ from a predator”—presented in the study as predator-mimicking electric fields—“by staying completely still and stopping its breathing,” Ryan Kempster, a shark biologist at the University of Western Australia and member of the research team, told BBC News....

Interestingly, the shark embryos began to respond less strongly—they froze for shorter periods of time—as they sensed the same electric fields on multiple occasions. This suggests that the sharks are learning that such fields aren’t so dangerous after all. If the same concept applies to adult sharks, the results could have implications for improving electric shark repellents used to keep the predators away from fishing boats, where they can be killed as by catch, says Kempster, who founded the shark conservation group Support Our Sharks. More effective electric shark repellents could also be used to deter the predators from popular beaches, reducing the chances of a shark attack, Kempster told the BBC.

See a video of the shark embryos’ reaction to predators at ScienceNOW.