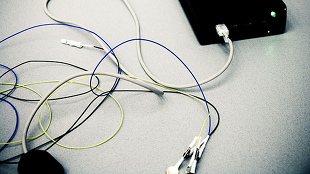 Electroencephalography sheds light on electrical activity in the brain.FLICKR, JM3

Children with autism show a variety of linguistic and social abilities, and it can be difficult to predict how a child will develop. But monitoring brain activity in 2-year-olds with autism spectrum disorder (ASD) can help predict their cognitive abilities at ages 4 and 6, according to a study published yesterday (May 29) in PLOS ONE.

When the developmentally normal children heard unfamiliar words, the electrical activity in their brains’ left hemisphere spiked in a predictable pattern. Some of the children with...

Moreover, even at age 2, the children who had more normal responses to unfamiliar words were likely to have higher scores on tests of social cognition.

“This information could be used to tailor treatment interventions from earlier ages than currently possible with behavior alone,” Elizabeth Redcay, a neuroscientist at the University of Maryland, College Park, told ScienceNOW.

The findings also support the idea that social skills are related to the acquisition of language and that low social cognition could help explain some autism patients’ difficulty with language.

Kuhl told Time that she plans to trying the test on 14-month-olds in hopes of predicting problems with language even earlier.