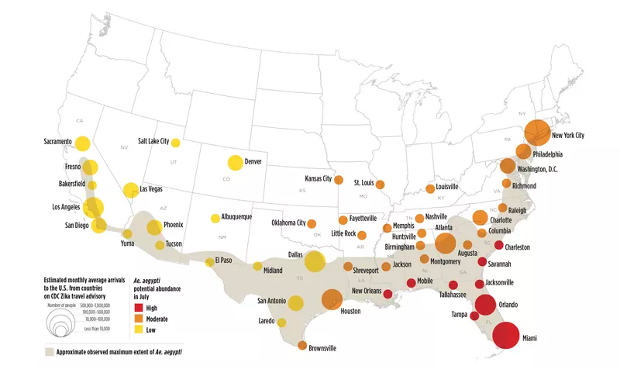 Many U.S. cities face the prospect of increasing risks of Zika-carrying mosquitoes.IMAGE BASED ON DATA MAPPED BY OLGA WILHELMI , NCAR GIS PROGRAMThe Zika virus that spread explosively throughout Latin America over the past several months will make its way to major US metropolises this summer, according to an analysis from researchers at the National Center for Atmospheric Research (NCAR) and other government agencies. The main driver of Zika’s northward spread will be warm summer weather, welcoming in Aedes aegypti, the main mosquito species that harbors and transmits the virus. But the researchers, who presented their model for Ae. aegypti’s potential spread yesterday (March 16) in PLOS Currents: Outbreaks, also cite international travel and socioeconomic factors influencing the risk of Zika infections across 50 US cities in the coming months.

“This research highlights the complex set of human and environmental factors that determine whether a...

The bottom line is that southeasterly cities—such as Miami, Orlando, and Charleston—can expect to see the highest abundances of Ae. aegypti in July and are, therefore, at the highest risk of Zika transmission. Larger cities—especially ones further north and west, like Houston, Dallas, Atlanta, and New York—will also experience the largest influxes of people travelling from countries on the US Centers for Disease Control and Prevention’s (CDC) Zika travel advisory. Florida is already preparing for the impending outbreak, with that state’s governor declaring a state of emergency over Zika last month.

Feeding into the potential spread of Ae. aegypti and Zika to cities as far north as St. Louis and Denver—outside the species’ normal summer range—are summer temperatures that are predicted to be higher than normal.

But the authors assure Americans that their modeling is not cause for anyone to panic. “We don’t want to alarm people, we’re not expecting to see a Zika pandemic in the United States like we’ve seen elsewhere because of mosquito controls and our homes are better sealed,” NCAR’s Andrew Monaghan told BuzzFeed News.

Meantime, insect repellent makers are ramping up production to cope with what they predict will be above-average demand for bug spray this spring and summer, The Wall Street Journal reported yesterday (March 16).