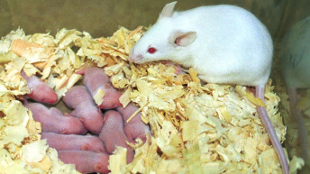 Exposure to vaginal microbiota during birth is now appreciated as a crucial step in establishing one’s own microbiome. Even before birth, however, the makeup of a new mother’s microbiome, and that of her offspring could be altered by stress, according to a mouse study published today (June 16) in Endocrinology.

“As the neonate’s gut is initially populated by the maternal vaginal microbiome, changes produced by maternal stress can alter this initial microbe population as well as determine many aspects of the host’s immune system that are also established during this early period,” study coauthor Tracy Bale, a neuroscientist at the University of Pennsylvania, said in a statement.

Researchers at the University of Pennsylvania performed “stress tests” on pregnant mice using a predator’s odor, restraint, or unfamiliar noises. After the mice gave birth, the scientists analyzed the bacterial communities in their vaginas and in their pups’...

“These studies have enormous translational potential, as many countries are already administering oral application of vaginal lavages to C-section delivered babies to ensure appropriate microbial exposure occurs,” Bale said in the statement.

To understand how the altered microbiomes could influence brain development, the team measured free amino acids in the pup’s brains. Levels of specific amino acids were also reduced in a region of the developing brains of male, but not female pups. In their paper, the researchers wrote that more work is needed to understand the link between maternal microbiota and neonatal brain metabolisms, as well as the mechanisms behind the apparent sex-specific effects they observed.