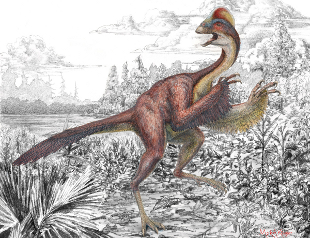 An artist's rendition of the "chicken from hell."MARK KLINGLER/CARNEGIE MUSEUM OF NATURAL HISTORYIts official name is Anzu wyliei, but researchers studying a pile of fossilized bones unearthed a decade ago have given the newly described species to whom they belonged a much more apt moniker: “the chicken from hell.”

“If you were to take a time machine back to the end of the age of dinosaurs and encountered this animal, your first thought would probably be, ‘What a big, weird looking bird,’” Matthew Lamanna, a paleontologist at Carnegie Museum of Natural History in Pittsburgh and lead author on the PLOS One paper reporting the find, told NPR. "I actually think ‘chicken from hell’ is a pretty good nickname for this thing."

Discovered in the Hell Creek geological formation of Montana and the Dakotas, the 66-million-year-old fossils belonged to a fast-running, 500-pound, four-meter-long creature with a bony...

“These fossils are some of the most interesting new dinosaurs to come out of North America over the past decade,” Stephen Brusatte, a vertebrate palaeontologist at the University of Edinburgh who wasn’t involved with the study, told The Guardian. A. wyliei belongs to a group of dinosaurs called oviraptorosaurs that ranged in size from something akin to modern chickens to Gigantoraptor, which was twice as tall as the average human. The hell chicken was the one of the first representatives of the group, which is mostly known from fossils originating in Asia, to be found in North America. “Oviraptorosaurs are one of the most bizarre groups of dinosaurs to ever live. This new dinosaur, Anzu, looks like something that was placed in the Cretaceous by a Hollywood monster movie director,” Brusatte continued. “Looking at these animals, it's hard to believe they were real.”