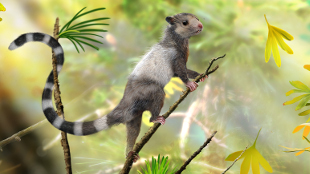 Fossils of squirrel-like animals found on a farm in northeastern China have features that indicate they were true mammals. The creatures, which lived about 160 million years ago, constitute a new clade, Euharamiyida. Their similarity to older fossils in the group Haramiyida suggests that mammals arose more than 200 million years ago, during the Late Triassic. Scientists from the American Museum of Natural History (AMNH) in New York City and the Chinese Academy of Sciences published their analysis of the fossils this week (September 10) in Nature.

Although bits and pieces of haramiyids were first discovered in the 19th century, and more complete skeletons were recently uncovered, it’s still unclear whether haramiyids were mammals. The new, related fossils have a three-boned middle ear that is unique to mammals, lending evidence to the idea that haramiyids were among the earliest mammals.

“For decades, scientists have...

The largest of the three species, Shenshou lui, probably weighed about 10 ounces, while the smallest was only the size of a house mouse. The fossils suggest that the slender animals spent time in trees, and had hands and feet adapted for grabbing branches. Their resemblance to present-day squirrels is a result of convergent evolution, as they belong to a lineage that diverged from that of modern mammals long ago.