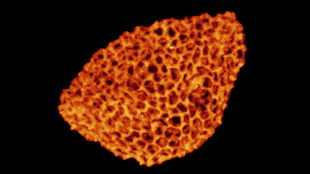 FRONTIERS IN PLANT SCIENCE, HOCHULI & FEIST-BURKHARDTFlowering plants, or angiosperms, are believed to have originated about 140 million years ago, during the Early Cretaceous period. But scientists from the Paleontological Institute and Museum at the University of Zürich have found angiosperm-like pollen grains that date back to the Middle Triassic, approximately 240 million years ago. The pollen grain discovery, published this week (October 1) in Frontiers in Plant Science, suggests that flowering plants may have evolved much earlier than originally believed.

For this study, authors Peter Hochuli and Susanne Feist-Burkhardt examined two core samples taken in Northern Switzerland. In sections of each that corresponded to the Middle Triassic, they identified pollen grains from what they described as six different groups. The pair then examined the pollen using light microscopy and confocal laser scanning microscopy. Based on the grains’ sizes, shapes, and surface textures, the researchers suggested the...

In 2004, Holchuli and Feist-Burkhardt published evidence of Triassic angiosperm-like pollen fossils that they found in a core sample from the Barents Sea, near Norway. But these newly discovered pollen fossils provide more evidence that flowering plants are older than once thought. “We believe that even highly cautious scientists will now be convinced that flowering plants evolved long before the Cretaceous,” Hochuli said in a statement.

Hochuli told the BBC that the number of different groups of pollen found in both the Barents Sea and Switzerland point to a diverse population of flowering plants “and that the group might originate from the Early Triassic or the Late Palaeozoic era.” He would now like to search even older sediments for evidence of angiosperm-like pollen. “That’s the next step,” he said.