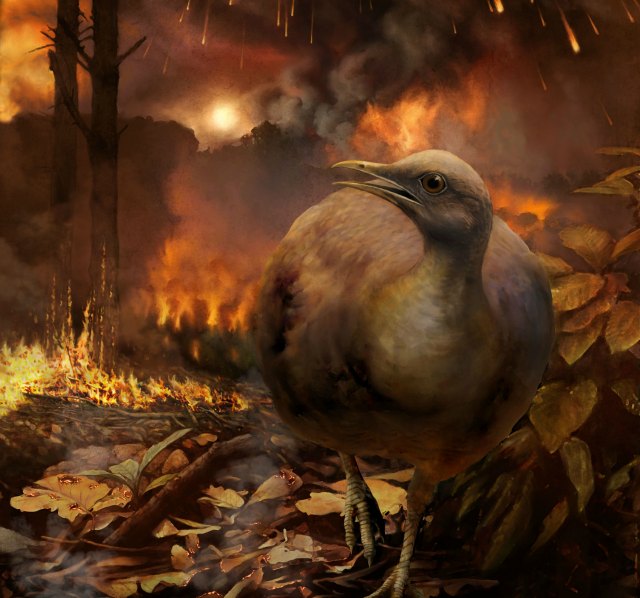 This illustration shows a hypothetical bird fleeing a burning forest in the aftermath of the asteroid strike that eliminated dinosaurs and destroyed global forests. PHILLIP M. KRZEMINSKI When an asteroid slammed into Earth 66 million years ago, it drove dinosaurs to extinction. New research published in Current Biology today (May 24) shows that among the birds left behind, only ground-dwelling ones survived.

“We concluded that the devastation of forests in the aftermath of the asteroid impact explains why tree-dwelling birds failed to survive across this extinction event,” Daniel Field, a paleontologist at the University of Bath, says in a statement.

The six-mile-wide asteroid impact in modern Mexico produced 1 million times more energy than an atomic bomb. According to The Guardian, fossil records from as far as Japan, Europe, and New Zealand are proof that scorching debris falling out of the sky destroyed forests globally. Besides...

According to The Atlantic, some scientists are of the opinion that Field’s theory does not explain everything. “Forest loss was only one of several factors working in combination that determined which bird lineages survived,” Jingmai O’Connor, a paleontologist at the Institute of Vertebrate Paleontology and Paleoanthroplogy in China, tells The Atlantic.

Luis Chiappe, the director of the Dinosaur Institute at the Natural History Museum of Los Angeles County, California, tells National Geographic it is “a very compelling argument” that “will stimulate new research and new questions.”