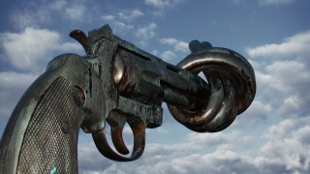 Anti-violence sculpture by Carl Fredrik Reuterswärd in Malmo, SwedenWIKIMEDIA, FRANCOIS POLITOFollowing an appeal by the scientific community to the administration to fund more gun-violence research, President Barack Obama has responded by instructing the Centers for Disease Control and Prevention (CDC) to “conduct or sponsor research into the causes of gun violence and the ways to prevent it,” according to a memorandum signed yesterday (January 16) by the President. The decision came as part of a 23-point plan to curb gun violence in the United States, and lifts a 17-year drought of gun-violence research funding in the country.

But the plan will not be without opposition: “even as this initiative was being unveiled, the National Rifle Association had begun lobbying against it,” ScienceInsider reported, releasing a video that criticized President Obama for being a “hypocrite,” restricting access to guns that some people may purchase for protection, while the...

Others, however, support the President’s decision. The American Public Health Association, issued a statement yesterday praising the decision. And Jens Ludwig, director of the University of Chicago research center known as the Crime Lab and a coauthor of the letter last week to Vice President Joseph Biden supporting such funding, called the plan “a terrific development.” “Without support for data and research in this area, it is very difficult to know which policy changes are most likely to generate net improvements in public safety that can justify the costs involved,” he told ScienceInsider.

Other goals in the 23-part plan include a universal background check for anyone looking to purchase a gun, a ban of military-style assault weapons and high-capacity ammunition magazines, and programs to support better mental health care. To complete its plan, the administration plans to ask Congress for $10 million in CDC funding to support gun-violence research, as well as other aspects of violence prevention, such as the role of video games and media in violent behavior. (Prior to the cessation of gun-violence research funding in 1996, the CDC’s budget for this research peaked at about $2.6 million.)