Inhibitory interneurons in the hippocampus, a brain region involved in memory, help ensure the formation of neutral memories in the face of an unrelated, fearful event, according to a study published last week (February 20) in Science.

“This study solved the puzzle of how the hippocampus can successfully encode the context, while ignoring the impact of the ongoing negative stimulus,” MIT’s Xu Liu, who was not involved with the research, told BBC News. The investigation allowed the team to “peek into the mouse’s brain and zoom into the cells of interest while the animal was learning,” he added.

Coauthor Attila Losonczy of Columbia University in New York and his collaborators suggested that, if they apply to humans, their results may have implications for understanding post-traumatic stress disorder. “If we understand how the circuits in our brain influence memory under normal conditions, we can then try to understand what... 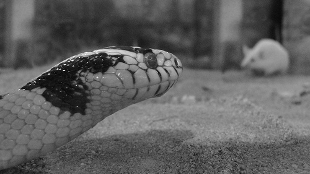 FLICKR, SALMA RASHADUsing cell-type–specific imaging to monitor the brains of mice as they underwent a classic fear conditioning experiment, the researchers found that the activation of certain hippocampal interneurons in a region known as CA1 were critical for the mice to associate the fearful stimulus with the environmental context. Inactivation of these interneurons during aversive stimuli released their inhibition on CA1 pyramidal cells and prevented fear learning.

“These cells are activated by the unpleasant salient event, and they act somewhat like a filter,” Losonczy told the BBC. “They may function to block out unwanted information related to this strong, salient event.”

For more on how researchers are monitoring the brains of living, behaving animals, see this month’s feature story, “Brains in Action.”