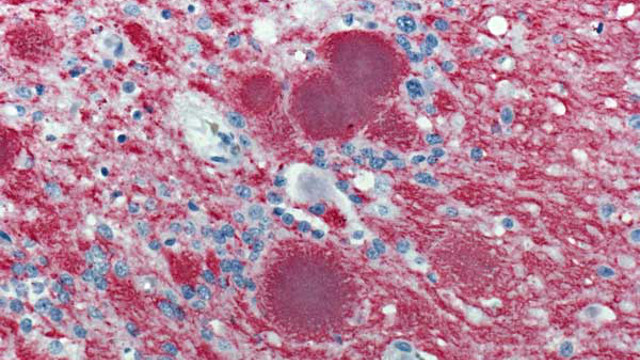 Immunohistochemical staining of cerebellar tissue of the patient who died of Creutzfeldt-Jakob diseaseWIKIMEDIA, CDCFrom skin samples of 23 patients with Creutzfeldt-Jakob disease (CJD), a human neurodegenerative ailment akin to mad cow disease, researchers have identified low levels of the causative misfolded protein aggregates called prions. When the team inoculated transgenic mice with a suspension of skin cells from two of the CJD patients, all 12 animals developed disease-like symptoms within about a year and a half, according to the study, published this week (November 22) in Science Translational Medicine.

“We have provided clear evidence of infectious prions within the skin of patients dying of Creutzfeldt-Jakob disease,” coauthor Byron Caughey of the National Institute of Allergy and Infectious Diseases Rocky Mountain Laboratories in Montana tells MedicalResearch.com. “Whether the low levels of prions in the skin present an actual risk of transmission . . . remains to be determined,” he adds....

Caughey notes that he and his colleagues examined “the full thickness of the skin, including the deepest innervated layers.” Whether the surface of the skin contains infectious prions will require further work. Also unclear is whether the skin prion levels found in this study could cause disease in exposed people. It’s known that people can be infected through contact with surgical tools that have been used on brains of people with CJD, but these tissues carry prion levels about 1,000-100,000 times higher than those Caughey’s team identified in the skin.

“Our finding of infectious prions in skin is important since it . . . raises concerns about the potential for disease transmission via common surgeries not involving the brain,” coauthor Wenquan Zou of Case Western Reserve School of Medicine says in a press release. “Further investigation is necessary to determine whether extra precautions should be taken during non-neurosurgeries of CJD patients, especially when surgical instruments will be reused.”

The findings also point to the possibility of diagnosing CJD through analysis of skin samples. Currently, the only way to positively identify CJD is via a brain biopsy or autopsy, though researchers have recently been working to develop a blood test for CJD that could help detect the disease before the onset of symptoms.