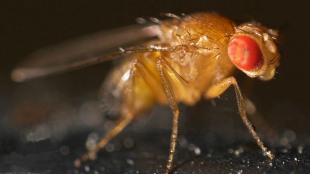 WIKIMEDIA, MR.CHECKERMost often associated with mad cow and other infectious diseases, prions have a bright side to them, too. A role for prions as memory-forming helpers is emerging, most recently supported by a study this month (February 11) in PLOS Biology revealing the proteins involved in regulating chain-forming prions in neurons.

The results shed light on a cellular dilemma: How can a neuron form a stable complex in a dynamic environment? It’s known that the fruit fly protein Orb2 can act like a prion in neurons, linking up with other Orb2 proteins to form a stable complex. The long-term memory of the fly is damaged without Orb2’s ability to form a chain.

The new study uncovered other proteins complicit in controlling Orb2’s ability to form an oligomer. The proteins increase the stability of one form of Orb2, called Orb2A, which then “seeds” the formation of a chain built by...

“Do you think God created prions just to kill?” Eric Kandel, who did much of the pioneering work on prions and memory, told Scientific American. “These things must have evolved initially to have a physiological function.” Whether that function is the same in humans as it is in fruit flies remains to be seen.