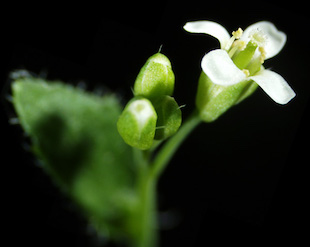 Thale cress (Arabidopsis thaliana)WIKIMEDIA, SUI-SETZWhen inserted into yeast, a plant protein behaved like a prion, the type of misfolded protein responsible for mad cow disease and related disorders in animals, researchers at the Whitehead Institute for Biomedical Research in Cambridge, Massachusetts, and their colleagues reported yesterday (April 25) in PNAS. The misfolded proteins might explain how plants are able to store and pass on memories, the researchers speculated.

Frantisek Baluska, who studies plant intelligence at the University of Bonn, Germany, but was not involved in the research, told New Scientist the finding was significant. “In fact, I was expecting the discovery of prions in plants,” he said.

Susan Lindquist of the Whitehead Institute and colleagues studied a protein from thale cress (Arabidopsis thaliana) involved in flowering, called Luminidependens (LD). When they inserted LD into yeast, it folded incorrectly, causing other proteins to misfold...

This may be the first indication that prion-like proteins exist in plants; additional studies are needed to confirm the finding. In its paper, the team proposed that these misfolded proteins may serve as the basis for a form of memory in plants.

While this role is speculative, “it would be really cool to find that prion-like behavior is playing a role in some normal aspect of plant development,” Richard Amasino, a plant biochemist at the University of Wisconsin–Madison who was not part of the work, told Nature News.