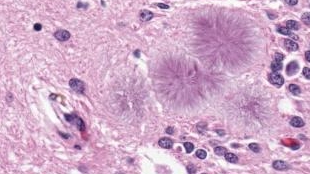 Brain tissue from Creutzfeldt-Jakob disease patientPUBLIC HEALTH IMAGE LIBRARY, SHERIF ZAKIWhen misfolded, prions can multiply to create large prion aggregates that cause diseases such as scrapie, mad cow, and Creutzfeldt–Jakob disease in humans. But before they become misfolded, prions play an important role in the brain. A new study published this week (February 13) in the Journal of Neuroscience has now shown that properly folded prions are important in neuronal plasticity, or learning, during development.

Earlier studies demonstrated other functions for prions in the brain. For example, the cells responsible for creating insulating sheathes that speed neuronal transmission require normal prion proteins to function properly. But  normal prions are abundant not only in these supporting cells but also in neurons themselves, especially during development.

In order to test if this abundance might affect learning, researchers from the International School for Advanced Studies in Trieste, Italy, took brain slices...

“The function of cellular prion protein is quite mysterious, but this convincingly demonstrates that it has a crucial role in strengthening synaptic connections within developing neural networks,” R. Douglas Fields from the National Institute for Child Health and Development in Bethesda, who was not involved in the study, told Nature.