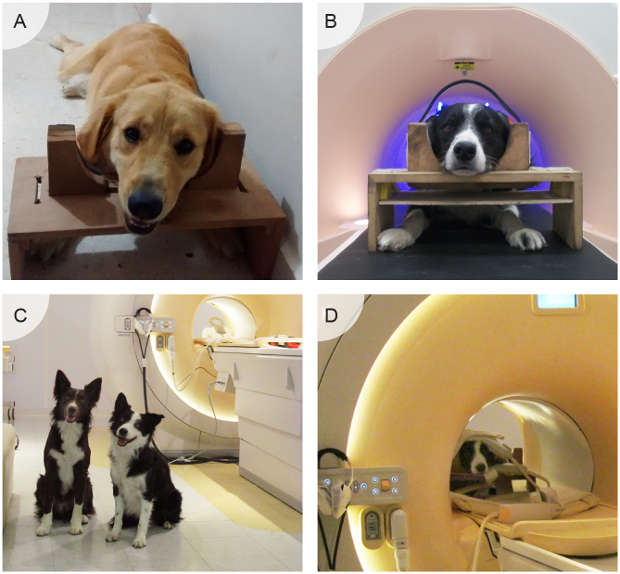 L.V. CUAYA ET AL., PLOS ONEResearchers from the National Autonomous University of Mexico have studied the brains of seven dogs trained to lie down but stay attentive inside an MRI scanner. The team presented the animals with photos of human faces or of objects. The object images elicited very little brain activity, but the human pictures triggered a burst of activity: the bilateral temporal cortex lit up the most, and the team saw additional activity in the frontal cortex, the caudate nucleus, and the thalamus.

“This portion of the temporal cortex in dogs could be anatomically and functionally similar to regions found in other species, like humans, non-human primates and sheep, which suggests a high degree of evolutionary conservation of the ventral visual pathway for face processing,” the researchers wrote in their paper, published this week (March 2) in PLOS ONE.

“The recognition of human faces by dogs could be an essential factor for establishing attachment with humans,” the authors of the new PLOS ONE study wrote in their paper.

The idea of putting dogs in an MRI machine to probe their brain activity during different tasks started with Emory University neuroscientist Gregory Berns, who in 2012 trained two dogs (including his own) to stay still while remaining alert, then presented the animals with an indication that food was coming. In this experiment, Berns recorded activity in the canines’ caudate nucleus, a brain region associated with reward processing. Last August, Berns and his colleagues tested six dogs in the MRI scanner and found that their temporal cortices responded much more to movies of human or dog faces than to movies of objects, supporting the Mexico group’s latest findings.

“[T]hese findings . . . may help explain dogs’ exquisite sensitivity to human social cues,” Berns and his colleagues wrote in their paper, published in PeerJ.