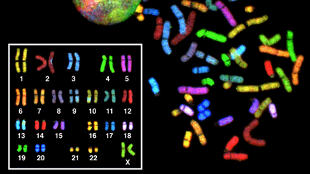 WIKIMEDIA, NATIONAL HUMAN GENOME RESEARCH INSTITUTEInduced pluripotent stem cells (iPSCs) grown from the skin cells of a person with Down syndrome are helping researchers grow cerebral organoids and track protein expression in an effort to better understand the disorder on a cellular and molecular level. University of Colorado Boulder postdoc Tristan McClure-Begley and his colleagues sought to better understand the neurological and developmental changes that occur in people with a third copy of chromosome 21, the unifying pathological feature of Down syndrome. “That third copy of chromosome 21 influences all aspects of embryonic development, including critical steps during brain development,” McClure-Begley said in a statement. “But we’ve had trouble identifying exactly why the extra chromosome has such widespread effects, partly because we’ve lacked good human tissue models of Down syndrome.”

So McClure-Begley and his colleagues took a fibroblast from a single Down syndrome patient, coaxed it into becoming...

The researchers found that protein expression did not follow a simple 1:1 ratio with the extra genes on the triplicate chromosome 21 leading to a proportional increase in proteins expressed. “Rather, there’s a complex change, where some proteins are upregulated, some proteins are downregulated—all reflecting a general disturbance in signaling,” McClure-Begley said. Many of the perturbed proteins were involved in early neurogenesis and cell cycle regulation, among other functions.

McClure-Begley added that his group plans to generate as many organoids from Down syndrome patients as possible in order characterize protein-expression profiles across the spectrum of the disorder, from mild to severe. “We can start observing . . . the discrete factors in their genome not on chromosome 21 that can influence the severity of their clinical presentation of Down syndrome,” he said. “By doing that, it’s our hope that we will actually be capable of then correlating clinical severity with a molecular signature from these tissues, thereby informing our ability to come up with tailored, personalized treatments to improve quality of life.”