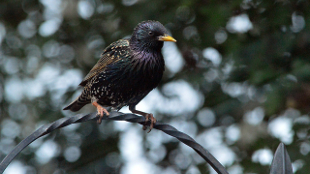 FLICKR, TIM WATTSResearchers have long recognized that sleep helps humans learn and remember new things, but animal models of such memory consolidation have been largely limited to rodents, which don’t sleep for long stretches like people do. In search of a better animal model of sleep, Timothy Brawn of the University of Chicago and his colleagues have turned to birds, which sleep long hours at night, just like humans.

Indeed, as Brawn and his colleagues published in 2010, sleep helps starlings learn new discrimination tasks. The researchers trained the birds to stick their beaks in a hole, a natural starling behavior, to prompt a clip of one of two starling songs. Then, if the birds stuck their beaks in the hole again, they would receive either a food reward, or the lights would turn off briefly, depending on which song had played. Soon, the birds learned to only respond...

Using EEG to take a closer look at the birds’ sleep, Brawn and his colleagues documented a similar pattern to humans, with slow-wave sleep becoming less frequent as rapid-eye movement (REM) becomes more frequent throughout the night. They also found that, after learning the new task, the birds experienced more slow-wave sleep early in the night. “Slow-wave sleep seems to be particularly important for memory consolidation,” Brawn told The Scientist.