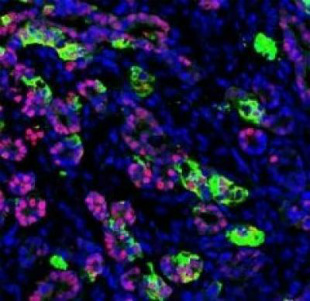 Stained human pancreatic cells, successfully transplanted into a mouseSAIYONG ZHUA team at the University of California, San Francisco (UCSF), has successfully created functional pancreatic cells from human skin cells that, when transplanted into immunodeficient mice, prevented the development of diabetes. The results were published yesterday (January 6) in Nature Communications.

Currently, one of the most widely used approaches to cell reprogramming involves reverting cells to pluripotent stem cells, which can then be used to generate any cell type found in the body. But the method used in this study directly reprograms cells into progenitors—cells that can produce only a limited number of organ-specific cell types.

“This new cellular reprogramming and...

To demonstrate the functionality of the generated pancreatic cells, the researchers transplanted the cells into mice with chemically induced diabetes. The transplanted cells produced insulin in response to changes in blood glucose concentration and successfully protected the mice from the disease.

Furthermore, the cells did not display the uncontrolled growth sometimes associated with stem cell transplants. The study showed that although these cells can be grown by the trillion in the lab, they maintain a relatively safe identity as organ-specific progenitors throughout the process.

The researchers conclude in their paper that the new approach represents a “viable alternative” to more commonly employed cell reprogramming methods, and could be used to manufacture cells intended for the medical treatment of people suffering from diabetes.