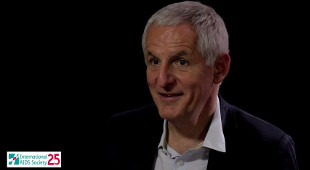 YOUTUBE, INTERNATIONAL AIDS SOCIETYJoep Lange, a professor of infectious diseases at the University of Amsterdam and former president of the International AIDS Society, died yesterday (July 17) on Malaysia Airlines Flight MH17, which was shot down over Ukraine. He was 59. Also on board was Lange’s partner, Jacqueline van Tongeren, director of communications at the Amsterdam Institute for Global Health and Development. Both were en route to the upcoming AIDS 2014 conference being held in Melbourne, Australia. In total, 298 people were killed in the MH17 crash, including other researchers travelling to the meeting.

“We wish to express our deepest sympathy with Joep’s children and with Joep’s and Jacqueline’s families, friends, and close colleagues,” the University of Amersterdam said in its initial statement following the crash.

“Joep had an absolute commitment to HIV treatment and care in Asia and Africa,” the University of New South Wales’s David Cooper, who...

Born Joseph Marie Albert (“Joep”) in Nieuwenhagen, the Netherlands, in 1954, Lange studied medicine at the University of Amsterdam, earning an MD in 1981 and a PhD in 1987. He dedicated much of his career to HIV/AIDS research and activism, founding the nonprofit PharmAccess Foundation in 2001 with the aim of improving access to HIV/AIDS therapies in underserved regions. He was president of the International AIDS Society from 2002 until 2004.

AIDS 2014 conference attendees gathered to honor Lange’s contributions to their field after learning of his death on Thursday (July 17), The New York Times reported. In attendance was the University of North Carolina, Chapel Hill’s David Margolis, who told the Times that the researchers recalled Lange having once said: “If we can get a cold can of Coke to any part of Africa, we can certainly deliver AIDS treatment.”

Daniel Kuritzkes of Harvard Medical School told The Washington Post that Lange was “an extraordinary leader, scientist, and humanitarian” who “fought ceaselessly for the dignity of all HIV-infected persons throughout the world.”

“Joep was a visionary amongst HIV researchers,” Richard Elion, clinical research director at Whitman-Walker Health in Washington, DC, told Vox. “This is a huge loss for the field.”

In an e-mail to the Washington Post, Paul Volberding, a researcher at the University of California, San Francisco’s UCSF-GIVI Center for AIDS Research who is in Melbourne for AIDS 2014, wrote: “He [Lange] was coming to share with us his deep insights in attacking the HIV epidemic from his long-standing and leading role in work across the world. . . . Many of us knew him as a wonderful friend as well as an outstanding scientific colleague. He was broad in his expertise and a voracious reader. This is an unspeakable loss, yet again to a senseless act of violence.”