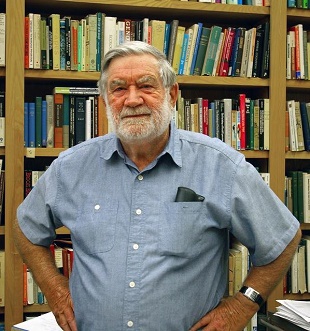 SACRAMENTO BEE, BETHANY DANIELSPeter Marler, professor emeritus in the department of neurobiology, physiology and behavior at the University of California, Davis, died this month (July 5), following a long illness. He was 86.

Considered one of the world’s foremost experts on bird song, Marler earned his first PhD in botany at University College London. His fascination with animal behavior led him to a second doctorate degree, from the University of Cambridge, with a focus on bird behavior. During his career, Marler taught and conducted research at the University of California, Berkeley, and at Rockefeller University in New York City. Although he retired from his position at Davis in 1994, Marler remained an active member of the research community.

His broad research on animal communication also extended to primates, with studies of predator-specific alarm signals in vervet monkeys and chimpanzees. Later research on why birds sing led Marler to conclude that some birds are taught to do so by older males, although they all have an innate instinct to learn songs specific to their species. The results resonated with researchers studying babies.

“It wasn’t just birds, but also primates, and human cognition,” Davis adjunct professor Marilyn Ramenofsky told The Sacramento Bee. “He was a giant in the whole area of communication.”

Marler is “widely considered to be the father of North American avian bio-acoustics,” author Don Stap wrote in his 2005 book Birdsong, quoted this month in The Los Angeles Times. “His early work at Berkeley on the white-crowned sparrow is probably the most cited paper in the literature, and it led to so much subsequent research that the bird has been studied more than any other songbird on the continent.”

“He was a foundational force,” Arthur Arnold from the University of California, Los Angeles, who studied bird song under Marler at Rockefeller, told the LA Times. “He was an intellectual giant and he was a mensch.”

Marler is survived by his wife, brother, sister, three children, and two grandchildren.