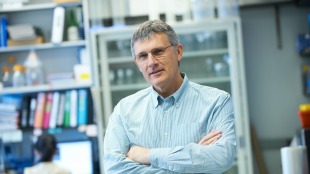 Hall was a leader in cytoskeleton research, noted for discovering the role of Rho GTPases in assembling the cellular structures.

“This work has contributed greatly to our understanding of how tumor cells become metastatic and spread throughout the body,” Craig Thompson, president of Memorial Sloan Kettering, and Joan Massagué, director of the Sloan Kettering Institute, wrote in an e-mail to The Scientist. “[Hall] was an extraordinary scientist and remarkable human being who will be sorely missed by all his colleagues.”

Hall’s recent work focused on cell polarity and migration. He moved to Memorial Sloan Kettering in 2004 after a decade leading a lab at University College London and, prior to that, a 12-year stint at the Institute for Cancer Research...

In 1992, Hall published two fundamental papers in Cell. One—cited more than 4,000 times, according to Google Scholar—described the role of Rho GTPases in bringing actin stress fibers together with focal adhesions. The other—cited more than 3,300 times—revealed the complementary role of the related protein, Rac.

Hall was the editor-in-chief of the Journal of Cell Biology. On its website, the journal’s staff stated: “He was an extraordinary scientist and colleague and will be greatly missed. Our thoughts are with his family and friends in this extremely difficult time.”

Update (May 4): In an e-mail to The Scientist, JCB Editor Kenneth Yamada of the National Institute of Dental and Craniofacial Research wrote: "Alan was a brilliant, innovative researcher and a deep and thoughtful thinker. He brought these qualities to bear both as our JCB Editor-in-Chief and as a key leader in cell biology and he will be greatly missed."