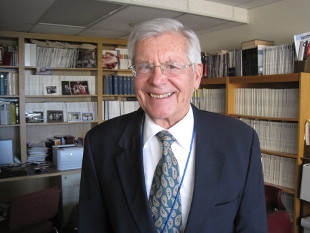 TEMPLE UNIVERSITY HEALTH SYSTEMGuenther Boden, endocrinologist and diabetes researcher, died last month (October 30) in Philadelphia. The cause was pancreatic cancer. He was 80.

Boden graduated from medical school in Germany in 1959, and completed postgraduate training in both Germany and the U.S. He began a 45-year tenure at Temple University in Philadelphia in 1970 and remained active there until his death.

The US National Institutes of Health funded Boden’s research for more than 40 years. He authored landmark studies on insulin resistance and sensitivity during his career, which helped advance research for type 2 diabetes treatments. Boden demonstrated the link between fatty acids in the blood and a loss of insulin activity, which leads to high blood sugar.

In September, Boden and his colleagues published a study on adults who were confined to a hospital bed and consumed 6,000 calories per day for a week. The study participants...

“[Boden] was known for giving his time and talent to assist patients, other physicians, scientists, and particularly students and junior faculty,” colleague Kevin Jon Williams from Temple University told The Philadelphia Inquirer. “His passion for medicine as a calling was beloved by all who worked alongside him.”