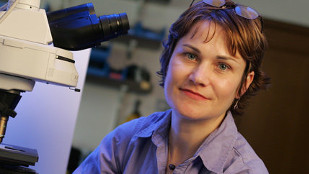 USC, PHIL CHANNINGKatrina Edwards, the University of Southern California (USC) geomicrobiologist whose research centered on identifying microbes living under the ocean, died this week (October 26) after a long illness. She was 46.

“Katrina was a tenacious and enthusiastic practitioner of interdisciplinary science, with a clear vision of fundamental questions in geobiology,” wrote her colleagues at the USC-based Center for Dark Energy Biosphere Investigations (C-DEBI), of which Edwards was the founding principal investigator. “She also had an innate ability to build and lead strong teams, to nurture a community of young researchers and educators, and to secure the resources necessary to accomplish her important goals.”

Born in 1968 in Columbus, Ohio, Edwards completed her undergraduate studies at Ohio State University before earning a PhD in geomicrobiology from the University of Wisconsin-Madison in 1999. She then accepted a position at the Woods Hole Oceanographic Institution in Massachusetts before joining...

“If you think about the bottom of the ocean, and that is a big if, you probably think of one of two settings: abyssal, wafting plains of sediments or smoking hot hydrothermal vents,” Edwards said in a 2010 statement announcing $25 million in NSF funding. “What lies in-between—hundreds of square kilometers in aerial extent, down kilometers below the ocean bottom, lies an active, living intraterrestrial ecosystem—this is what I think about almost all of the time.”

On a website created by family and friends, Edwards’s colleagues memorialized the geomicrobiologist and her contributions to the field. “She was the original Mistress of the Dark World, and a true trailblazer in so many ways,” wrote the Marine Biological Laboratory’s Julie Huber, who worked with Edwards in Woods Hole. Brian Glazer from the University of Hawaii wrote that Edwards “always helped push the envelope in thinking about what was achievable.”

Edwards is survived by her three children, both parents, and three of four siblings.