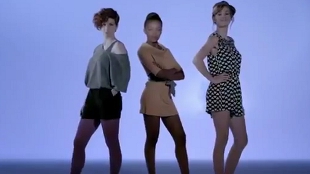 "Science: It's a Girl Thing." It’s the name of a campaign launched by the European Commission (EC) last Thursday (June 21) with the intent of reducing the lingering gender gap in science, technology, engineering, and math (STEM) fields. While the intention may be good, the EC’s methods are being questions—specifically, a 53-second promotional video featuring female models in high heels and short skirts and a male scientist watching on with interest.

The montage of nail polish, lipstick, mathematical equations, smoking Erlenmeyer flasks, and giggling girls “is so chock-full of clichés that viewers might be forgiven for thinking it a parody,” ScienceInsider reported. But as EC's spokesperson for research, innovation, and science Michael Jennings said in a tweet, "Commission doesn't really do irony."