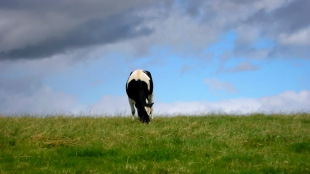 WIKIMEDIA, MACIEKLEWCalifornia lawmakers this week (August 11) approved a bill restricting the use of antibiotics in farm animals to cases substantiated by prescriptions and requiring that drugmakers label antibiotics as prescription-only. Although federal guidelines request similar practices, if enacted, this would be the first instance of such restrictions becoming law.

The rule is intended to curb the practice of using antibiotics to beef up livestock, a tactic that has been fingered as augmenting antibiotic-resistance in humans. Yet, environmental advocates are disappointed.

The bill “would prohibit drug manufacturers from selling antibiotics for ‘growth promotion’ uses, but would allow the very same drugs to be used routinely to help animals survive unhealthy living conditions,” Jonathan Kaplan, the director of the National Resources Defense Council’s Food and Agriculture program, wrote on his staff’s blog. “It’s a gigantic loophole that we fear will do little to change actual drug use.”

In June, the US Food and Drug Administration reported that all 26 antibiotics producers have signed on to the voluntary guidelines for phasing out the use of their drugs for food production.