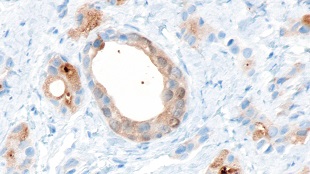 Micrograph of prostate carcinomaWIKIMEDIA, NEPHRONDifferentiating human embryonic stem cells (hESCs) into the various cell types of the prostate gland, researchers at the University of Illinois at Chicago (UIC) have built a miniature prostate organoid. Measuring about 1 millimeter in size, the 3-D cell culture expresses the same biomarkers found in the adult organ.

Using the model, the team demonstrated that exposure to bisphenol A (BPA), a common chemical in plastics, may stimulate the overproduction of prostate stem cells, thereby increasing a man’s risk of cancer—a finding the reaffirms previous studies in animal models and adult cell cultures. The researchers published their results today (July 29) in PLOS ONE.

“This is as definitive as it gets, when it comes to the effect of BPA on the developing prostate,” study lead Gail Prins of the UIC College of Medicine, said in a press release. “It produces an abnormally...

Other groups have previously created prostate organoids, as well as 3-D cell cultures to model the functions of diverse other organs, including the eye, gut, liver, kidney, pancreas, lung, stomach, breast, and even brain, Nature reported. “It’s probably the most significant development in the stem-cell field in the last five or six years,” Austin Smith, director of the Wellcome Trust/MRC Stem Cell Institute at the University of Cambridge, U.K., told Nature.