In the study, chemist Gengfeng Zheng of Fudan University in Shanghai and his colleagues replaced the rod and cone cells in blind mice’s eyes with prosthetic retinas made of arrays of the gold-coated titanium dioxide nanowires. When the researchers shone ultraviolet, blue, and green light into the devices, the mice’s pupils constricted, a change the scientists did not see when they shone light into the eyes of the mice before the prosthetic was implanted. The prosthetic absorbs light, which generates photovoltage and triggers electrical activity in neurons nearby, restoring the mice’s sensitivity to light, the authors explain in the paper.

The prosthetic doesn’t currently allow for full color vision, the researchers note, so they are working on incorporating nanowires that are sensitive to different wavelengths of light, perhaps making it possible for mice, and one day humans, with the implant to differentiate the colors of the rainbow. 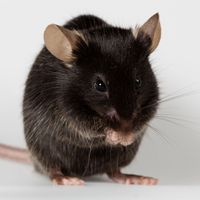