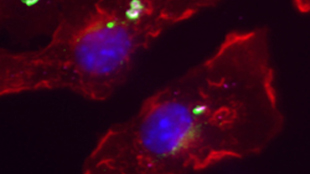 Researchers have identified the function of an obscure but large family of proteins whose function in cellular immune responses had been unknown.

Guanylate-binding proteins, Gbps for short, protect cells from pathogens that have snuck into a cell by activating cellular degradation machinery, according to a study published today (May 5) in Science. Understanding how the proteins work could help spur the development of small drug molecules to activate a cell's own defenses against infection, a potential alternative to antibiotics.

"The function of the Gbps remained mysterious for a very long time despite the fact that they are produced in massive amounts upon infection," said Sascha Martens, who studies autophagy at the Max F. Perutz Laboratories in Austria and was not involved in the research, in an email...

Gbps are produced in abundance in response to type II interferon, a defense activation protein released by host cells in presence of pathogens. John MacMicking and colleagues at the Yale University School of Medicine performed a loss of function screen on the 11 members of the Gbp family, individually silencing the RNA transcripts of the genes in mouse macrophages. "Now that we can target RNA, it allows us to discriminate between individual members of a closely related family," said MacMicking.

The researchers found that four of the Gbps -- Gbp1, Gbp6, Gbp7, and Gbp10 -- conferred immunity to two bacteria: Listeria monocytogenes, responsible for food borne infection in humans, and Mycobacerium bovis, a close relative to the bacterium that causes tuberculosis. Engineering Gbp1-deficient mice, the team confirmed that animals lacking the Gbp1 gene were more susceptible to infection.

Digging into the mechanism by which the proteins protect the cells, the researchers found that at least two of them, Gbp1 and Gbp7, deliver antimicrobial cargo such as toxic peptides to the bacteria in sac-like vesicles (see below video). Gbp1 also tags invading bacterial cells so that they are delivered to lysosomes and digested.

NEED TO ADD IN SWF FILE FROM CLASSIC TS MULTIMEDIA

The team conducted additional experiments in human cells and found that human orthologs of the Gbp proteins also help fight infection. "It looks like there's conservation across both human and mouse, and we anticipate there will be conservation across other vertebrate species as well," said MacMicking.

Understanding how the cell's internal defensive machinery works could help scientists develop small molecule drugs that imitate its ability to fight and kill bacteria. "We're running out of new antibiotics," said MacMicking. "One idea is to eventually generate drugs that actually mimic host processes that are normally very effective at clearing bacteria."