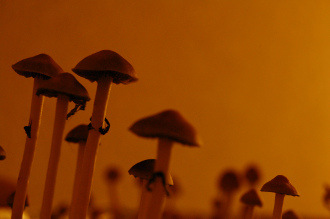 FLICKR, AFGOOEY74Species of Psilocybe fungi—known for the hallucinogenic effects of their active compound psilocybin, which is under study for their medicinal properties—have found homes within a new family tree thanks to researchers from the University of Guadalajara in Mexico. In a study published in Botany this week (August 6), the researchers reconstruct a multigene phylogeny for Psilocybe, the related, non-hallucinogenic genus Deconica, and other fungi exemplars using three nuclear markers. Altogether, the team sampled 28 specimens of Psilocybe, 14 of Deconica, and 24 outgroup taxa in its molecular analysis.

“Although taxon sampling included only 14.5 percent of the world total estimate of Psilocybe  . . . we sampled species exhibiting all morphological variation in both genera,” Guadalajara’s Laura Guzmán-Dávalos and her colleagues wrote in the paper.

The phylogenetic analysis unearthed evidence suggesting that morphological traits shared among species of Psilocybe and Deconica were not...

“The family placement of Psilocybe and Deconica has been the subject of much debate,” the researchers wrote. Guzmán-Dávalos and her colleagues noted Psilocybe is a polyphyletic group within the family Hymenogastraceae. However, they added that a formal classification will require an analysis of even more species, especially in Deconica.