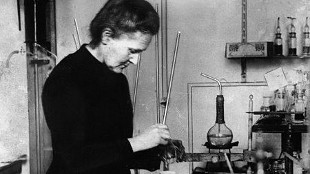 Marie Curie, Wikimedia, UnknownThe percentage of women authors in academic publishing has risen to 30 percent since 1665, but women are still less likely to be first or last author, and tend to cluster in sub-disciplines, according to researchers at the University of Washington who analyzed two million academic papers published from 1665 to 2010 by 2.7 million scientists, social scientists, and humanities scholars.

“The results show us what a lot of people have been saying and many of my female colleagues have been feeling,” environmental scientist Jennifer Jacquet of New York University, who was involved in the study, told The Chronicle of Higher Education. “Things are getting better for women in academia,” despite the fact that they are still not publishing at the same rate and level as their male counterparts.

Mining JSTOR, a digital archive of scholarly publications, the researchers tagged articles by field and subfield...

In 2010, when women scholars reached 30 percent of published authors, women made up 42 percent of full-time faculty, 34 percent of which were tenured professors. This suggests that although women are continually gaining ground in publishing—only 27 percent of authors publishing between 1990 and 2010 were women—they are still not publishing at the same rate as men. Moreover, women are under-represented as the coveted first author, the lead author on the research, as well as last author, considered the senior researcher on the study. In molecular and cellular biology, for example, women made up 30 percent of the authors but only 16.5 percent of the last authors. And only about 19 percent of women were first author overall, with the majority falling in the second, third, or fourth author listed.

When the researchers looked at the gender distribution among sub-disciplines, they found additional disparities. For example, although women comprised 30 percent of authors overall, some subfields, such as paleontology, had only 16.6 percent female authors.

Despite the gaps in publishing, the data don’t necessarily provide evidence for gender discrimination. “The international literature show that when women submit work, there is no bias in it being accepted, but the likelihood of women submitting work may be lower," human development professor Wendy Williams of Cornell University, who studies women’s role in science, told The Chronicle. Still, most believe the results warrant further study.