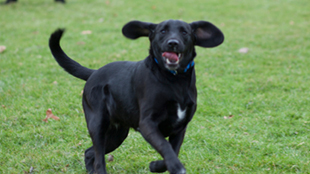 A puppy has been born from a frozen embryo for the first time in the Western hemisphere, Cornell University announced on Monday (February 4). The puppy’s successful birth is a hopeful sign for endangered canids, like red wolves and African wild dogs, for which conservation efforts may be aided by similar reproductive technologies.

Klondike, a black labrador-beagle mix with a white spot on his chest, was born 9 months ago from the fertilized embryo of a beagle mother and lab father. The embryo was frozen by scientists from Cornell's Baker Institute for Animal Health and the Smithsonian Conservation Biology Institute before being inserted it into a beagle surrogate mom.

Frozen embryos are often implanted into cows and humans during in vitro fertilization, but achieving the same success in dogs has been difficult. Scientists do not fully understand what triggers dogs to come out of...

Klondike’s birth is a model for improving assisted reproductive technologies for threatened species. Red wolves, for example, were extinct in the wild by 1980, and despite a successful breeding and reintroduction program in North Carolina, there are still fewer than 150 outside of captivity. Additionally, US zoos that are currently working to breed maned wolves in captivity often struggle with getting the animals to mate.

“Reproduction in dogs is remarkably different than in other mammals,” Travis said in a press release. “We're working to understand these differences so we can tackle issues ranging from developing contraceptives to preserving the genetic diversity of endangered animals through assisted reproduction.”