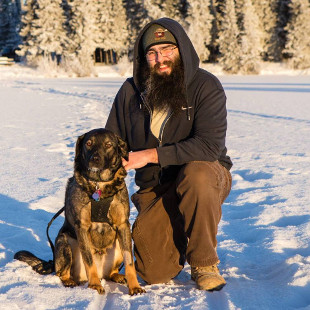 Bryan Box with “Barnaby”BRYAN BOXBryan Box, an ecologist who studies the impacts of spruce beetles on forests, likes to listen to music in the lab. Sometimes it inspires new scientific ideas. It can also inspire him in other ways, such as to organize a satellite March for Science in Anchorage. At least that’s what happened when he was listening to Rage Against the Machine a couple weeks ago.

The Scientist: How and why did you first become involved in organizing a satellite march in your community?

Bryan Box: I was sitting in my lab working. I had a dish filled with about 15,000 dead beetles. I was sitting there sorting them . . . and every once in a while when I’d need to refocus my eyes and stop looking at beetles—that are, you know, a milligram—I’d look up over at the NPR news feed and something...

TS: Who so far has expressed interest in participating?

BB: A lot of folks [at] agencies that cannot be named. . . . A massive part of our population in the state is [state and] federal employees. So we had a bunch of support from wildlife biologists . . . and we have a lot of folks here in the community who are really fond of conservation work. So we’ve got a lot of science enthusiasts. . . . Basically the entire anthropology department at the University of Alaska are into this, too. . . . Because the march is coinciding with Earth Day, it looks like we’re going to be teaming up with about a half-dozen other organizations to try and do a big hullabaloo in downtown Anchorage.

TS: Generally speaking, how do you and your co-organizers aim to show nonpartisan support for “science” with the event you’re organizing?

BB: We won’t be using posters in protest. We’ll be using [scientific] presentation posters, you know, the kind you’d bring to a convention or a seminar. . . . I’ve got a bunch of presentation posters I’ve made for middle schoolers because I do a lot of outreach with schools in the community. On Monday, I’m going to meet with the anthropology department and we’re going to try and coordinate with some of their classes to see if they want to [attend the march,] bring posters, and present some research topics they’ve studied this semester.

What my overall intent would be is, instead of saying Hey, this is all bullcrap! and being negative the whole time, we can spend our time being positive and saying Hey, here’s what my research did; Here’s what I discovered about doing stable isotope analysis on spruce beetles; Here’s the smoking gun with climate change—that sort of thing. Make it more into an outdoor, mobile seminar. That would be my overall goal: just going out there and informing the public. I’m hoping there’s going to be tons of people who are really interested in science that show up for Earth Day and [that march participants] just engage people—show them that science isn’t just a bunch of idiots with lab coats that play around with test tubes, you know?

TS: Are there any specific challenges in your region that you and your co-organizers hope to address?

BB: Alaska is sort of in the frying pan right now. . . . Permafrost is starting to melt, so it’s starting to mess with our stream systems, it’s starting to mess with the sorts of plants that are growing. We’ve got tree line advance. We had a 500 percent increase in spruce beetle infestations in the past year. . . . I’d like to get people to start thinking about policies—what we need to do in order to address all these situations. Because everywhere you look in the state, you can’t turn over a rock without having climate change smack you in the face with something.

TS: Do you have any advice for others looking to organize similar events?

BB: Try to keep it as nonpartisan as possible. Watch out for who is joining the group—there is always the potential that it could get turned into a different purpose. In my community, we’ve got a lot of highly, highly motivated people—a lot of researchers, a lot of enthusiasts. The problem is, some people aren’t on the same level with their intent. So just, make sure that your project doesn’t get hijacked. . . . Try to [keep it] focused on science education and policy.