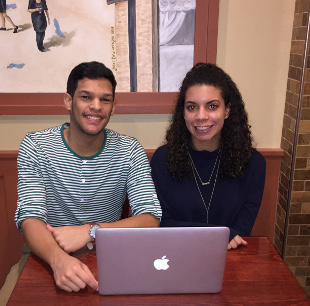 JONATHAN PLAZA AND ALEXANDRIA TRUJILLOA planned march in support of science on Washington, DC, has inspired the organization of satellite events across the U.S. and around the world. While the organizers of March for Science have yet to announce a date for the flagship event, volunteers have already assumed leadership roles in planning gatherings in their own cities. Alexandria Trujillo, a pharmacology PhD student at the University at Buffalo, New York, and Jonathan Plaza, an undergraduate computer science student and research assistant at the Buffalo VA Medical Center, are two such volunteers.

The Scientist: How did you both become involved in this initiative, and what are your roles?

Alexandria Trujillo: I got started with this movement just by noticing, online, the DC organizers’ group. [We] decided that Buffalo has a large enough science community and community that is interested in science that we would be able to represent...

Jonathan Plaza: I’m responsible for getting [event] staff together and delegating different tasks. For example, we’ve been working on our website, which is already up, we’ve been working on a logo, and I’ve been starting to organize a social media campaign that we’re hoping to use as a platform to make our movement a little bigger.

TS: What are some of the issues specific to your region your group hopes to highlight with this march?

AT: Buffalo’s public school system is underserved and it doesn’t have a strong-enough science program. . . . There are outside programs, for example, the [University at Buffalo’s] Interdisciplinary Science and Engineering Partnership . . . that sends scientists to work directly with teachers. I’d like to see more programs like this, more people getting involved in these programs, and . . . bring together all of these passionate people who want to make these changes and see just what we can do as a collective to improve our schools.

Buffalo and the western New York region have had different ecological disasters. The most notable one would be the Love Canal, which is what led to the creation of superfunds in the United States. Highlighting things like that—a lot of people don’t know that history. We want to share support for the work the EPA [US Environmental Protection Agency] is doing locally.

TS: Generally speaking, how do you and your fellow organizers aim to show support for “science” on a national, international scale?

JP: We are working closely with the DC group and we are working closely with other groups, such as [in] Cleveland and Houston. . . . We really think that, going forward, we really need to [foster] public interest in science . . . among people who aren’t scientists, who don’t necessarily have a strong scientific background, so they understand the role they play in how we can all move forward to implement our vision for the future: for a cleaner, safer environment and better technologies to help all of us.

AT: We want to use this march to bring together scientists from all the different universities and colleges we have, and even private institutions, and have them meet with the public to [help] break the distrust—the feeling that scientists are “other” or different than us. To show that scientists are people, and people are scientists. And that working together and looking at the world through the scientific method . . . is really important.

AT: The response has been very large. A lot of people are in support of this march. Especially since this is a nonpartisan march; it is about science. . . . Also we’re working closely with a local not-for-profit organization, called Women in STEM, and we look to work closely with [them] to go along with the spirit of the DC group: turning the march into a movement, after the march, continuing to have different community-outreach events and engage with the public—not have things just kind of end with the march.

TS: Do you have and advice for others who are thinking about organizing this type of event?

JP: Utilize social media. It’s an extremely powerful tool. . . . Reach out to local scientists, reach out to local web developers, graphic designers, anybody to help you implement your vision for where you want this march to go. After you’ve made contact with them, make sure you keep in good contact with them. Make sure you have a strong working team, don’t make unilateral decisions. Have a committee . . . promote diversity. We all have different strengths. Utilize the skills of people in your community. I really think that’s the best way, moving forward, to really make this a successful event.