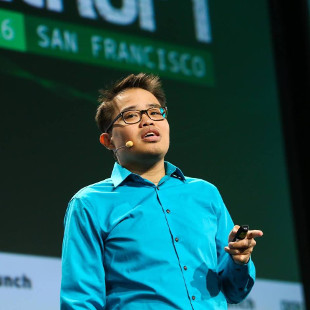 Speaking at a TechCrunch eventCOURTESY OF AMADO GULOYA materials and inorganic chemist by training, Amado Guloy is now dedicating 30 to 40 hours a week organizing a March for Science in San Francisco. As founder and chief executive officer of Rex Animal Health, which offers a “23andme-type test to look at the health and wellbeing of [livestock] animals,” Guloy was concerned when he saw reports of research restrictions and gag orders at the US Environmental Protection Agency (EPA) and Department of Agriculture (USDA). “We do have some slight commercial interests in ensuring those agencies are not silenced when it comes to science,” he said. But his reason for planning a march, he said, was more than personal. “This is about raising awareness,” Guloy told The Scientist: “This is what science has done, this is why data is important.”

The Scientist: What prompted you to take the...

Amado Guloy: We have an executive committee of a dozen people strong now . . . I’m acting as chair because, in running companies, you have to know how to be organized and put together people, so that was one of the things I brought to the table.

I got involved initially through the Reddit group, when people were talking about it [the March for Science in DC], I was like, Alright, this makes sense. Especially for me, I was worried about the silencing of the USDA and the EPA. . . . When people started organizing [nationwide], I said, Alright, well I’m in San Francisco, let’s do something. We eventually got on the sister march Slack [channel], where there are lots of other people doing different things. It was really fortunate that everybody started tackling associated logistics with the march in different ways to where it just sort of put the puzzle together. We had a really good mojo going on with the [San Francisco march] executive committee before we made it all official.

All of the marches kind of happened—at least with the big cities—kind of simultaneously with DC.

TS: Sister march Slack? That must be busy.

AG: It’s organized chaos. It’s basically a lot of the organizers from different cities: we share best practices [and] different resources, such as, Hey, does anybody know anyone at Organization XYZ? It works because this is a grassroots movement. A lot of grassroots movements fail because of lack of resources. One of the things we are trying to ensure with the Slack [channel] is that there are resources for everybody.

TS: How do you and your co-organizers intend to show support for “science” with the events you’re planning?

AG: We’re doing different booths on different policies, different controversial facts about science, and [explaining] what the science says. We want to encourage open debate and peer review and understand where people are coming from. A lot of the events before and during the march itself will be focused on science communication, science literacy, science as it concerns public policy.

TS: To the extent you’re able, is your team working to make this a nonpartisan demonstration?

AG: The more accurate term would be post-partisan. We’re encouraging collaboration of the parties [to support] the betterment of humanity with evidence-based policies. A lot of what we’re doing is really trying to build the biggest coalition around science, not just scientists, but science enthusiasts—families, teachers, kids, everybody.

TS: What’s your response to the opinion that a march could politicize science, perhaps even do more harm than good?

AG: Science is already politicized, at least when you think about publicly funded science. . . .  On some level, [science] is already politicized with certain acts done by Congress, like increased oversight over what kinds of science we should be able to practice and pursue [using federal funds]. So in a lot of ways, to say that this [march] would further politicize science? I think it’s too late. What we’re trying to do is . . . say, OK, the narrative of science has been politicized and nitpicked. Let’s go back to really, ‘This is what the scientific method is and this is why it should not be nitpicked,’ so if you are going to make a narrative with data, it’s done in a scientific manner.

TS: Are there any science policy-related issues specific to the Bay Area that your team is hoping to draw attention to with this march?

AG: We do have some stories of really good science and good public policies forming together that we would like to highlight, like [California Senate Bill] 27—trying to encourage antibiotic stewardship in livestock and agriculture to try to prevent superbugs from . . . becoming a public health crisis. We want to highlight these different existing policies and regulations that have already not harmed us, economically, and have actually helped in some ways, that have been based on sound science.

See “Proposed Law Aims to Restrict Antibiotic Use on Farms”

AG: We’ve had an amazing response. We’ve already been endorsed by the Engineers and Scientists [of California] Local 20 . . . same with the UAW [Local] 5810, the postdocs’ union. We have further endorsements forthcoming. A lot of people have embraced this movement to say, Hey, this is something that has really been needed for some time. And I think that as long as we realize this is, whatever you want to call it—nonpartisan, post-partisan, bipartisan—there is this role that science will have to play in shaping public policy moving forward.

TS: What would you say to folks who may be interested in participating but, for whatever reason, are wary of doing so?

AG: There has to really be an internal reflection of, if you stay silent now, will you regret it later on?

TS: How will you and your co-organizers evaluate the success of the march?

AG: Turnout and enthusiasm for the march—that’s kind of going to be the most obvious thing. . . . But I think the biggest [indicator] will be the momentum after the march. . . . We definitely don’t want it to be a [one] and done thing. . . . This is not the end. This is only the beginning.

Correction (February 16): Amado Guloy is an inorganic chemist by traning (not an organic chemist, as was written). The Scientist regrets the error.