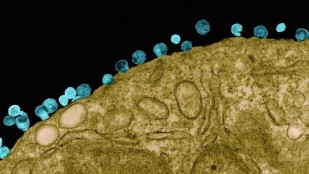 HIV viruses break away from a lymphocyte.THE CELL, WELLCOME IMAGES

Five years ago, Timothy Brown received transplants of bone marrow in Berlin to treat his leukemia. Because he also happened to be HIV-positive, he doctor chose a donor that carried a mutation in the CCR5 gene, which encodes a co-receptor that HIV uses to infect cells. Following his surgeries, Brown was able to stop conventional antiretroviral treatment and was deemed cured in 2009 when the virus failed to return. But research presented at the International Workshop on HIV & Hepatitis Virus last week (June 8) found HIV signals still lingering in Brown’s blood plasma, sparking well-known HIV researcher Alain Lafeuillade to suggest he has been re-infected, or was never cured.

Several labs looked at Brown’s blood, and some, but not all, found evidence of circulating viral RNA using sensitive PCR tests. Two strains of the virus were sequenced, which...

But those involved in the study have condemned Lafeuillade’s remarks, with session chair and collaborator Douglas Richman telling ScienceInsider that Lafeuillade "completely misinterpreted" the presentation. "We weren't trying to say HIV was still there or he [Brown] hadn't been cured,” added Steven Yukl, who gave the talk. “The point of the presentation was to raise the question of how do we define a cure and, at this level of detection, how do we know the signal is real?"

Richman is among the collaborators that found nothing, and thinks the result may be due to contamination issues. He staunchly defends the position that Brown is cured. "[Brown's] been off ARVs for 5 years,” he told ScienceInsider. “That trumps all these assays."