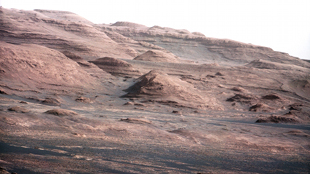 NASA/JPL-CALTECH/MSSS NASA has planned to someday send a manned mission to Mars, but radiation has long been a concern. A Radiation Assessment Detector aboard the vessel that took Curiosity to the planet has measured the radiation exposure received on the trip as being high enough to be prohibitive to humans, Wired Science reported—at least with current NASA rules and spacecraft equipment.

A person traveling to Mars and back who did not ever get off the spacecraft would be exposed to .66 sieverts, according to the instrument. The highest dose a male NASA astronaut is permitted to experience over a lifetime currently is 1.2 sieverts; females can be exposed to only 1 sievert. If the astronaut landed on Mars and explored, the dose would be much higher.

“If, as the authors suggest, the MSL data correspond to the dose to be expected by astronauts on a similarly shielded vehicle under similar...

The main fear is cancer, but radiation can also cause short-term memory loss and other health problems.

NASA has estimated the radiation involved in such a trip before, but this is the first time they have gotten measurements from an instrument shielded the same way human astronauts would be shielded on a journey to Mars. The results are at the high end of previous estimates but not unexpected, Nature reported.

Sheila Thibeault, a physicist from NASA’s Langley Research Center in Virginia, told Nature that one solution would be better radiation shielding for any spacecraft carrying astronauts. She and colleagues are testing hydrogenated materials as materials in hopes that they will be light enough for space flight and capable of blocking radiation more effectively than current options.