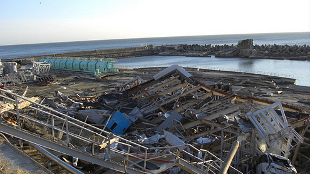 Flickr, M1K3YLevels of radiation in the seas surrounding the ruined Fukushima Daiichi power plant in Japan are showing no signs of dropping off as expected, according to new data presented last week (November 12-13) at a conference in Tokyo. Scientists believe that continued leaks from the plant in addition to run off from contaminated land and radiation-soaked sediment on the sea floor are responsible.

In March 2011, the Fukushima disaster—in which a massive earthquake sparked a tsunami that damaged the nuclear power plant—resulted in the largest ever discharge of radioactivity into the ocean. Most dispersed across the Pacific, where it was diluted to extremely low levels. But in the seas immediately around the plant, levels of caesium-137 have remained at around 1,000 becquerels, which is high compared to natural background levels. Though such levels are not likely to pose a risk to human health, the situation could have grave...

Scientists suspect that rainfall is washing radioactivity from the land into rivers, which then carry it down to the sea, helping to maintain the high radiation levels. The plant itself may also still be leaking radiation, they suggest. But Jota Kanda, an oceanographer at the Tokyo University of Marine Science and Technology, told Nature that the main cause is most likely the sandy ocean floor, which contains around 95 terabecquerels of radioactive caesium. The sediment may have absorbed the radioactive caesium directly, or the radioactivity may have been deposited there via the excretions of tiny marine organisms like plankton.

Either way, that contamination is finding its way into the food chain. Bottom-dwelling fish in the area show radioactivity levels above the 100 becquerels per kilogram limit set by the Japanese government. And although levels vary widely between species, fisheries have been forced to remain closed, with no estimate for when they will be allowed to reopen.