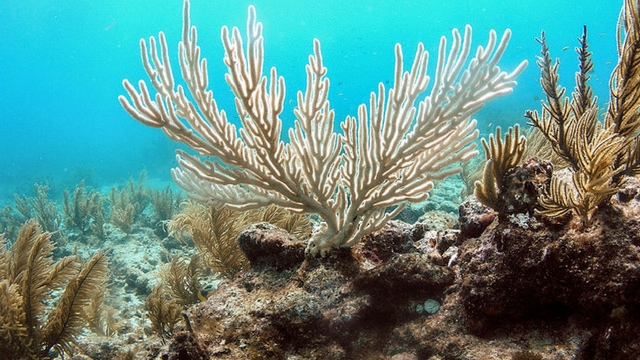 Pervasive coral bleaching is waning—albeit to varying extents—throughout the Atlantic, Pacific, and Indian Oceans, the National Oceanic and Atmospheric Administration (NOAA) reports in a statement released Monday (June 19). Researchers will diligently track temperature and bleaching data in the coming months to determine whether a worldwide bleaching event is subsiding, according to the statement.

A NOAA Coral Reef Watch status report on the bleaching event indicates that in April, areas throughout the Western Indian Ocean demonstrated no or low levels of bleach-inducing heat stress, “provid[ing] the first hint that the Third Global Coral Bleaching Event might be coming to an end.” According to the Coral Reef Watch’s latest satellite data (June 21), areas throughout the Western Indian Ocean are not currently experiencing any bleach-inducing heat stress.

The Great Barrier Reef, which experienced historically dire bleaching in 2016 is also currently in the clear...

“[T]hat’s not to say that all coral reefs are in the clear and none of them are experiencing bleaching anymore,” NOAA Coral Reef Conservation Program (CRCP) director Jennifer Koss tells The Washington Post.

For instance, the status report predicts that, based on a four-month outlook, areas within the Eastern Pacific will experience harsh heat stress once more in the coming months. In addition, higher levels of heat stress are in the cards for the northwestern islands of Hawaii, which have already suffered from prolonged, destructive bleaching.

See “Warming to Blame for Coral Bleaching in Hawaii”

“This global coral bleaching event has been the most widespread, longest and perhaps the most damaging on record,” Coral Reef Watch coordinator C. Mark Eakin says in the NOAA statement. “NOAA is working with scientists, resource managers and communities around the world to determine what the true impacts of this event will be on coral reefs.”

Given that 70 percent of corals worldwide were subjected to bleach-causing stressors, the road to recovery will be slow going, reports Inside Climate News.

“It’s an improvement, but I won't say that everything is rosy,” Eakin tells Inside Climate News. “For those places that have seen a lot of mortality, it takes 10 to 15 years to start getting back a good amount of coral growth.”